The weather doesn't seem so promising though, as we leave Errachidia in the pooring rain. Hopefully this doesn't mean all the oueds will have filled up and the tracks will be muddy. We stock up with some necessary provisions in Boudenib and manage to find the beginning of the piste quite easily. The first few kilometres we advance at  steady pace. The track is good and even and we take the first wet oued crossing without any problems. Behind some small hills, safe from unwanted attention we make our first campsite. There is nowbody to be seen or heard within miles around and the sky is full of stars. Life is good... 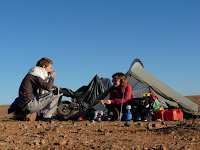 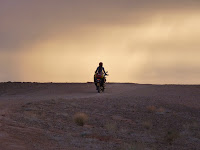 Nicolaas adds: Actually I am quite amazed we've gotten so far without any problems. Seven years ago, I ended up back in Boudenib after a whole day of off-piste riding, having consumed 8L of water (August!) and 10L of fuel. Thanks to modern technology, paper maps are obsolete and it's just following the line on the GPS now... Isabel is right to make fun of me: I am usually slow to adopt new technology, but now I'm a fan.

We carry an old guidebook "Pistes du Maroc" (Gandini) to get some background information on the region and the potential difficulties we have to overcome. It's written for 4WD enthusiasts and I have noticed before that our bikes are no match for them in some parts of the pistes. Therefore, the next day I'm a little concerned when I read: "franchissement de nombreux oueds" ahead at km 57. Indeed, all of a sudden the rocky plateau is interrupted by canyons coming from the cliffs on the left, that mark the edge of the Hamada du Guir. At first they are not so difficult yet, but they become deeper and the slopes steeper when we get closer to the cliffs. 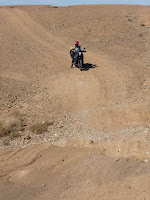 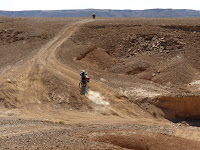 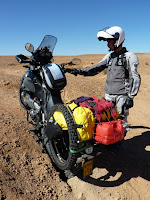 By now we are no longer riding a track, we are walking, lifting bikes, cursing, carrying luggage and consuming a lot of water and energy. The most difficult parts are where 4WD's have ruined the uphill slope, making it sandy but with hard bumps underneath. Isabel swears never to ride a track again and even I am regretting our venturing into the desert now. It takes us a whole day to cross the 5km (bird's flight) of oueds. Late in the afternoon, stones on the piste that it is closed and we are directed towards the cliffs. I obey and leave Isabel to check whether the track goes in the good direction. It does. Only to find out several hours later that it is a dead end taken by many, as the turning tire marks point out... Someone doesn't like tourists here, it seems. 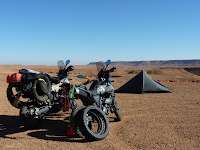 Anyway, we put the tent in a beautiful spot facing the horrible oueds and enjoy the absolute silence, which is only once brutally shattered by a (presumably army) truck passing by on top of the cliffs near the Algerian border, at least a few kilometers away... The next day, we go back to the "closed" track and find a nice piste leading in the good direction. However, the terrain remains tough and we start to get a bit scared. We are slowly running out of water (15L in total) and there hasn't been any water point so far to fill up. No choice but to continue, we'll see. Late in the afternoon, I am glad to detect a few dromedaries, which means nomads, which means water. We don't want to continue and push our luck, so we decide to take a track leading back to the tarmac near Erfoud, joining the piste that we took a couple of days before. This time, Isabel seems to fly over the boulders along the river bed, it is incredible to see how much she has learned in the past few days. 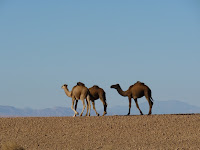 We find a welcoming and charming tourist hotel near Erfoud. The open-minded owner, married to a Belgian wife, tells us that the Boudenib-Merzouga piste was once part of the Paris-Dakar in its early days. And IT IS DIFFICULT. We are proud of ourselves, but if we keep on hammering the bikes like this, we are never going to get through Africa, so maybe we should stick to tarmac from now on... except for a little tour around the dunes of Erg Chebbi.

Which brings me to the bikes: except for the self-inflicted injuries (damaged wind screen, broken right hand guard and lots of scratches on Isabel's bike, scratches on mine), they are doing great. They consume no more than 4L on the road, not so much more on the dirt. Even with the heavy luggage, the suspension is more than satisfying, given our moderate speed. In Spain, I noticed that the rubber dampers in the rear wheel of mine were worn out, which is a known problem of the Tenere. I changed them for a used pair and hope for the best. Else... nothing. The Heidenaus have taken the beating on the pistes quite well but there are some signs of damage already. No punctures so far. The only thing I'm doing right now is greasing and cleaning.
Geplaatst door Isabel om 21:10