We bought 2 nearly new '08 Yamaha XT660Z Tenere motorbikes. Immediately when the new Ténéré was presented to the public, we both fell in love with its looks. We found some very valuable arguments why this bike would be a good choice for this trip: 1/ the legendary durability of its predecessors; 2/ the no-nonsense modern build quality that was (nearly) unanimously appreciated by motorcycle journalists and 3/ Nicolaas's experience with his XT250 called Dora. After all, however, it is an emotional thing: if you don't like the bike, you won't ride it... 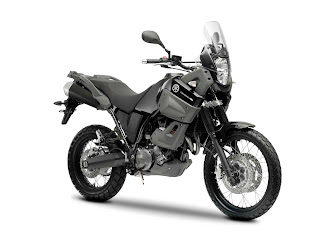 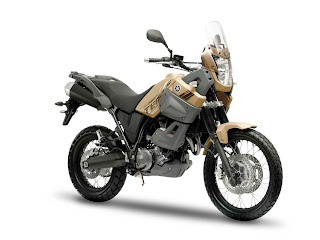 We are travelling as light as possible. Our past cycling holidays have certainly helped us a lot in cutting down the weight... That's one of the reasons why we chose soft luggage instead of strong but heavy alu panniers. Another reason was safety in the very very unlikely ;) event of a fall: panniers can injury one's legs, while soft luggage - together with our spare tires strapped to the sides - will dampen the impact. We are satisfied with the Great Basin bags, despite the rigid zippers, but absolutely not with the Bagster system: it might be perfectly fit for Sunday afternoon rides in Europe, but not for the real thing. By now, the tank bags have been repaired several times and are attached to the steering head with straps instead. Some major mods on the bikes are the larger windscreen, which effectively helps neutralizing the very annoying buffeting at higher speeds, and the foam air filter. The Tenere being a "built to last" companion has nevertheless proven to be vulnerable to very sandy/dusty conditions: we have heard of other adventurers whose Tenere died in Tunesia with the stock paper filter. Finally, the Hepco & Becker crash bars need to protect the radiator and coolant reservoir, which are not well shielded otherwise: unlike the upper grey panel, which is supported by a transverse rod, the lower panel is just a cover. To fit the crash bars, they had to be adjusted here and there, but once attached they obediently fulfill their task.
The tire choice has been a pain: we think the Heidenau K60 is the better alternative in terms of durability (also because of its harder compound) and is surprisingly cheap in Belgium, but it is certainly not good enough for wet (mud) off-road conditions. The TKC's are supposed to have more self-cleaning capacity in the Central African mud, but most travellers agree that they wear faster. Leaving home on nearly worn tires and taking new K60's with us, we had the TKC's sent to Southern Spain, where we mounted the new K60 front and rear tires. The TKC's travelled with us until we exchanged the front K60's (still in good condition after 10k) for the TKC's in Ouagadougou, to be able to transport an extra T63 rear that we bought via Guillaume, the manager of Le Pavillon Vert. He might still be able to find some 17" tires. Nicolaas' rear K60 was replaced after 12k, first by another K60 that we bought from our travel companion Boni in Lomé and then temporarily by a softer TKC80 in Yaoundé. Isabel's K60 was replaced by the T63 mud tire after an incredible 17.5k in Yaoundé. In Congo, Nicolaas' half-worn front TKC was exchanged for a new K60, to save it for Isabel. With all this careful calculation and a lucky streak, we might be able to ride back to Europe on the available rubber. If we had to plan it all over, we'd leave home with a K60 front and rear and take a spare K60 rear and a mud tire. And even if the Ultra Heavy Duty inner tubes are performing brilliantly, we'd definitely consider looking out for tubeless rims, given the time and sweat spent during on-the-road repairs.


For those who worry about us, some words about safety measures: our heads are in very comfortable and safe Schuberth C3 helmets, equipped with SRC-systems that allow us to communicate via Bluetooth (and listen to local FM radio). They have been doing very fine for 20k, but now they are showing signs of fatigue: bad electrical contacts, regular software faults... One of our best picks - saving us from a lot of trouble on difficult tracks - are the Alpinestars' Tech 3 All-Terrain boots (thank you, Patrick!). Isabel is wearing a men's cut, since no single brand seems to produce an all-terrain women's boot, but it fits well. She was having less trouble than Nicolaas breaking them in on the bike... And of course, we are wearing leather gloves and well-ventilated protective suits that nevertheless make us sweat to death. We wouldn't advice not to wear them, though.
Before we left, the bikes had been serviced according to the Yamaha recommendations for 10k/30k and 2 years of age. Since then, the oil was changed every 5k to 8k (replacing the filter every other time), chain and sprockets have been replaced once and valve clearance was adjusted after 22k on the road. Strangely, the steering head of Nicolaas' bike had to be cleaned and lubricated after 14k. It might have something to do with the dust we have been riding through: we've lost count of the times we've washed the air filters and spark plugs have since been replaced every 8k or so... While preparing the bikes, we received the enthusiast help from Patrick, our Yamaha dealer in Kontich. Hopefully, we won't need to contact him again from a Congolese telephone booth, as when the air boxes were full of dust...